David Edwards is widely regarded as the best Trick Shot Artist in the business. A former European Tour Professional himself, he has now performed his amazing show in over 50 different countries.

The show has been in demand at some of the world’s top events including The Ryder Cup, Solheim Cup and numerous times at The DPWTC in Dubai.

One of David's biggest fans is veteran television commentator Peter Alliss. “There is a small band of golf professionals who have the consummate ability being able to demonstrate a variety of trick shots with great skill and aplomb” said Peter. “During my life in the world of golf I've seen most of them and David Edwards ranks alongside the best.”

If you’re planning a Corporate Day, Charity Day or have a Special Event coming up at your club, then don’t hesitate get in contact with David who has helped raise many thousands of pounds for charity both home and abroad.

He can also offer a brilliant On-Course Video Commentary package which ensures that all the memorable moments from your special day will stay with you for ever.

Be prepared to be amazed! 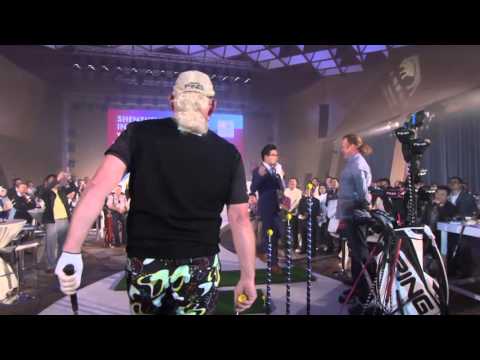